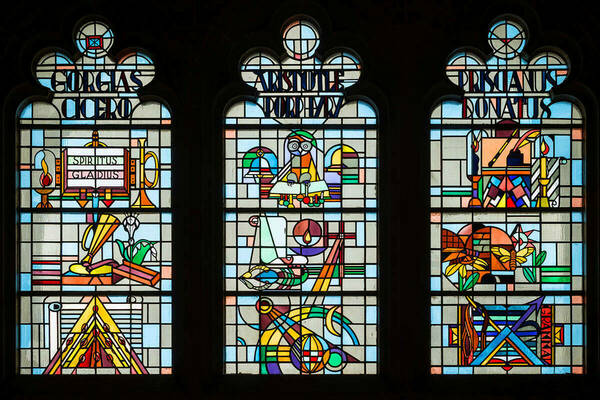 Forum Area Expert Robert Goulding is among the latest faculty members from the College of Arts & Letters who have won National Endowment for the Humanities fellowships, extending the University of Notre Dame’s record success with the federal agency committed to supporting original research and scholarship.

“We are thrilled and proud that these members of our faculty are continuing Notre Dame’s unprecedented success in earning NEH fellowships and grants,” said Sarah A. Mustillo, the I.A. O’Shaughnessy Dean of the College of Arts & Letters. “These awards recognize the outstanding research that is happening here across a range of disciplines, the creativity and originality of our scholars, as well as the excellent support provided by the Institute for Scholarship in the Liberal Arts throughout the application process.”

Goulding, director of the Reilly Center for Science, Technology, and Values, has received a significant grant for a digital scholarship project, in partnership with the Navari Family Center for Digital Scholarship and director Scott Weingart as well as collaborators at the University of Oxford’s Bodleian Library.

With a grant through the NEH’s New Directions for Digital Scholarship in Cultural Institutions program, scholars at Notre Dame and Oxford will develop a new platform that makes digital archives easier to analyze, present, and reuse.

In the early days of digital humanities, Goulding said, developers constructed systems of data storage and retrieval for their projects, based on needs of the time. Today, many of these projects are stuck in obsolete systems — they cannot be easily accessed by researchers, nor can they be added to or extended, or combined with other similar projects.

“This project, utilizing the expertise of researchers and developers at Notre Dame and the University of Oxford, promises to give new life to aging digital projects and preserve them in perpetuity,” said Goulding, who is also an associate professor in the Program of Liberal Studies and director of the History & Philosophy of Science Ph.D. program.

Goulding will lead the development of a proof of concept for an interoperable text framework (ITF) — a loose term for a body of conventions and contracts that specify how to format data and its associated metadata so it can be used by multiple different platforms. The team plans to develop an enhanced, accessible platform capable of hosting images alongside complex textual transcriptions and diagrams with contemporary navigational and annotation tools.

To test the platform, the team will upgrade an older digital project — “The manuscripts of Thomas Harriot (1560–1621),” which Goulding co-edited — that exemplifies the challenges ITF might face in its development and the kinds and scale of problems it will solve.

The 8,000 pages of Harriot’s manuscripts are a highly unordered treasure trove of mathematical findings, personal letters and notes, experimental reports, alchemical trials, drawings, geometric diagrams, and maps of the moon and Sun, all written in a mix of Latin, English, mathematical symbolic notation, and a script Harriot invented to transcribe the language of the Carolina Algonquian Indigenous peoples he encountered on his trip to Roanoke.

The two previous attempts to print the entire corpus of Harriot’s writing — in the early 19th century by Oxford scholars and in the 1970s — failed because of the vast complexity of the material, its disordered state, and the need for every one of the 8,000 pages to be placed in an interpretive framework, Goulding said. The online publication of the manuscripts in 2012 promised to address these issues, but foundered because of software limitations and standards of that era.

“This revival of the project promises to make these manuscripts available to all,” Goulding said, “completing a project begun 200 years ago at the Bodleian Library.”

Originally published by Beth Staples at al.nd.edu on January 13, 2022.