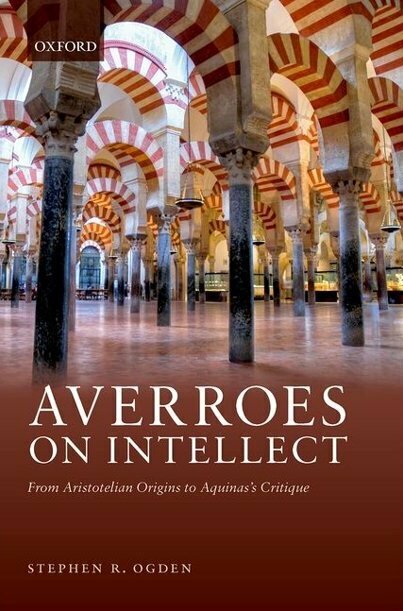 In keeping with our goal of facilitating research and collaboration among scholars working in various areas and periods of the history of philosophy, we'd like to spread the word about the great work that our colleagues at Notre Dame have been doing. Below are details on some recent publications from our affiliated faculty!

Averroes on Intellect provides a detailed analysis of the Muslim philosopher Averroes (Ibn Rushd)'s notorious unicity thesis -- the view that there is only one separate and eternal intellect for all human beings. It focuses directly on Averroes' arguments, both from the text of Aristotle's De Anima and, more importantly, his own philosophical arguments in the Long Commentary on the De Anima.

Stephen Ogden defends Averroes' interpretation of De Anima using a combination of Greek, Arabic, Latin, and contemporary sources. Yet, Ogden also insists that Averroes is not merely a 'commentator' but an incisive philosopher in his own right. The author thus reconstructs and analyzes Averroes' two most significant independent philosophical arguments, the Determinate Particular Argument and the Unity Argument. Alternative ancient and medieval views are also considered throughout, especially from two important foils before and after Averroes, namely, Avicenna (Ibn Sina) and Thomas Aquinas. Aquinas' most famous and penetrating arguments against the unicity thesis are also addressed. Finally, Ogden considers Averroes' own objections to broader metaphysical views of the soul like Avicenna's and Aquinas', which agree with him on several key points including the immateriality of the intellect and the individuation of human souls by matter, while still diverging on the number and substantial nature of the intellect.

The central goal of this book is to provide readers with a single study of Averroes' most pivotal arguments on intellect, consolidating and building on recent scholarship and offering a comprehensive case for his unicity thesis in the wider context of Aristotelian epistemology and metaphysics.

Why is the human mind able to perceive and understand the truth about reality; that is, why does it seem to be the mind's specific function to know the world? Sean Kelsey argues that both the question itself and the way Aristotle answers it are key to understanding his work De Anima, a systematic philosophical account of the soul and its powers.

In this original reading of a familiar but highly compressed text, Kelsey shows how this question underpins Aristotle's inquiry into the nature of soul, sensibility, and intelligence. He argues that, for Aristotle, the reason why it is in human nature to know beings is that 'the soul in a way is all beings'.

This new perspective on the De Anima throws fresh and interesting light on familiar Aristotelian doctrines: for example, that sensibility is a kind of ratio (logos), or that the intellect is simple, separate, and unmixed.

Shane Duarte (trans.), Metaphysical Disputation I: On the Nature of First Philosophy or Metaphysics by Francisco Suárez

The Catholic University of America Press (2021)

Francisco Suárez (1548-1617) was one of the most important philosophers and theologians of Early Modern Scholasticism. Although Suárez spent most of his academic career as a professor of theology, he is better known today for his Metaphysical Disputations (Salamanca, 1597).

This edition, translated by Shane Duarte, contains a facing-page English translation of Metaphysical Disputation I, which is introductory and devoted to the nature of metaphysics itself. In it, Suárez first specifies this science’s object and nature (Sections 1 and 2) and then discusses its unity (Section 3), its end, utility and functions (Section 4), its status as the most perfect natural science and true wisdom (Section 5), and finally the thesis that it is the science most of all desired by means of a natural appetite (Section 6). Those interested in late scholastic conceptions of metaphysics and their influence on the better known metaphysical systems of the seventeenth century – e.g., Descartes’s – will find the volume especially useful.

The Latin text contained in this volume introduces a significant number of corrections to the text of the Vivès edition, the one standardly used by scholars of Suárez, and thus more faithfully reproduces the text of the first edition. The volume also contains a lengthy introduction that provides a detailed survey of the disputation’s principal claims and arguments.

In this book, Katharina Kraus develops a novel interpretation of Immanuel Kant’s theory of empirical self-knowledge and the self-formation of individual persons. Despite the huge amount of work devoted to Kant’s conception of the thinking subject, surprisingly little work has been offered on the question of what, according to Kant, makes us the individual persons we are. The few interpretations available differ hugely over questions such as what, for Kant, an empirical self or person is and whether Kant allows for a substantial notion of empirical self-knowledge. This book not only offers systematic discussions of central themes, such as the perception of one’s own mental states, the reflexivity of consciousness, kinds of self-consciousness, personal identity, self-reference and the self-ascription of mental properties, but also transforms our understanding of human individuality in Kant by fundamentally rethinking the role that reason (Vernunft) plays in it.

The first main thesis of the book is that inner experience is empirical cognition (in the Kantian sense) of oneself as a psychological person, rather than as a mere object. More specifically, one cognizes oneself only qua one's psychological features, including occurrent mental states and more temporally stable psychological properties, rather than as a persistent mental substance. Such self-cognition not only must meet the sensible and conceptual conditions of cognition, but also requires the regulative use of an idea of reason, the idea of the soul as the concept of a unified mental whole. The second main thesis is, then, that persons form themselves in the course of realizing their mental capacities under the normative guidance of the idea of the soul. A person is an empirical reality in the process of becoming – a process that is guided by a rational ideal. Kraus's interpretation finally suggests that the way in which Kant conceives of personhood is closer to an Aristotelian soul-form, than to a Cartesian mind-substance.

In this book, Gretchen Reydams-Schils provides the first study to assess in its entirety the fourth-century Latin commentary on Plato's Timaeus by the otherwise unknown Calcidius, also addressing features of his Latin translation. The first part examines the authorial voice of the commentator and the overall purpose of the work; the second part provides an overview of the key themes; and the third part reassesses the commentary's relation to Stoicism, Aristotle, potential sources, and the Christian tradition. This commentary was one of the main channels through which the legacy of Plato and Greek philosophy was passed on to the Christian Latin West. The text, which also establishes a connection between Plato's cosmology and Genesis, thus represents a distinctive cultural encounter between the Greek and the Roman philosophical traditions, and between non-Christian and Christian currents of thought.

In this volume, Karl Ameriks explores 'Kantian subjects' in three senses. In Part I, he first clarifies the most distinctive features-such as freedom and autonomy-of Kant's notion of what it is for us to be a subject. Other chapters then consider related 'subjects' that are basic topics in other parts of Kant's philosophy, such as his notions of necessity and history. Part II examines the ways in which many of us, as 'late modern,' have been highly influenced by Kant's philosophy and its indirect effect on our self-conception through successive generations of post-Kantians, such as Hegel and Schelling, and early Romantic writers such as Holderlin, Schlegel, and Novalis, thus making us 'Kantian subjects' in a new historical sense. By defending the fundamentals of Kant's ethics in reaction to some of the latest scholarship in the opening chapters, Ameriks offers an extensive argument that Holderlin expresses a valuable philosophical position that is much closer to Kant than has generally been recognized. He also argues that it was necessary for Kant's position to be supplemented by the new conception, introduced by the post-Kantians, of philosophy as fundamentally historical, and that this conception has had a growing influence on the most interesting strands of Anglophone as well as Continental philosophy.

This book is the first to interpret and reflect on Augustine's seminal argument concerning humility and pride, especially in politics and philosophy, in The City of God. Mary Keys shows how contemporary readers have much to gain from engaging Augustine's lengthy argument on behalf of virtuous humility. She also demonstrates how a deeper understanding of the classical and Christian philosophical-rhetorical modes of discourse in The City of God enables readers to appreciate and evaluate Augustine's nuanced case for humility in politics, philosophy, and religion. Comprised of a series of interpretive essays and commentaries following Augustine's own order of segments and themes in The City of God, Keys' volume unpacks the author's complex text and elucidates its challenge, meaning, and importance for contemporary readers. It also illuminates a central, yet easily underestimated theme with perennial relevance in a classic work of political thought and religion.