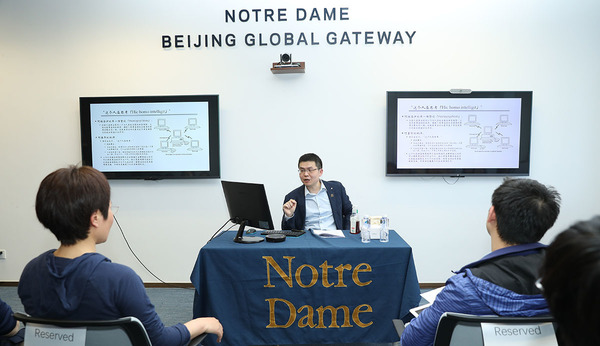 The Beijing Global Gateway, in partnership with the Jacques Maritain Center at Notre Dame and the Thomistic Institute at the Angelicum in Rome, hosted an event on April 17, 2021, as part of the Western Medieval Philosophy Lecture series. The first lecture, titled “Rational Individuals: An Introduction to Aquinas’s Philosophical Anthropology,” was held at the Beijing Global Gateway and was simultaneously available as a livestream. More than 40 incoming and current Notre Dame students, alumni, and parents attended the lecture physically at the Gateway office and nearly 1,000 people watched the livestream event.

“It's a unique opportunity for cultural exchange on topics of great interest at Notre Dame, ” says John O’Callaghan, director of the Jacques Maritain Center.

“The contribution of our Chinese friends to the study of these areas of scholarship brings a welcome new perspective to our efforts in Europe and the United States to advance the study of medieval philosophy and theology. We hope that we can turn around and offer our own contributions to the research being done in China.”

The speaker, Tianyue Wu, is an associate professor of philosophy at Peking University in China and was a visiting scholar at Notre Dame in 2010. Wu’s lecture was focused on concepts of “reason” and “individual” as clues to break down the contemporary divisions of philosophy of mind, epistemology, meta-ethics, philosophy of action, and moral psychology, and to explore the overall picture and core features of Aquinas's philosophical anthropology.

"The Middle Ages are still seen by many as a dark age, and medieval philosophy as the 'handmaiden of theology' is even less impressive,” says Wu. “I hope that this series of lectures will help Chinese audiences to enter the colorful world of medieval philosophy, and to grasp and experience its charm in a more intuitive way."

A series of lectures, seminars, workshops, and small conferences will be organized on western medieval philosophy as part of this partnership at the Gateway in the next two years. Scholars across China, Europe, and the United States will be invited to participate in the lecture series either virtually or in person.

The next two events will take place in May and June.

Originally published by Reagan Li at beijing.nd.edu on May 07, 2021.