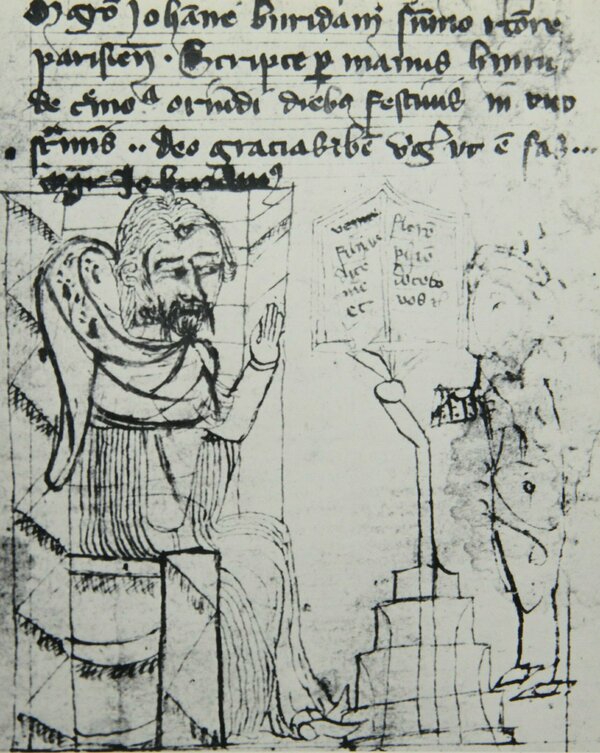 Please join us for our final history of philosophy lunchtime workshop of the semester! Here's the info about this week's meeting:

Who: Juhana Toivanen - Academy Research Fellow at the University of Jyväskylä, Finland, and History of Philosophy Forum Visiting Scholar
What: "Buridan (and others) on bestiality and moral vice" (see below for an abstract)
Where: The Maritain library (Geddes hall, room 437)
When: Friday, April 29, 12:00-1:00

An abstract is included below. For more information about the workshop, please email Dylan MacFarlane (dmacfarl@nd.edu). We hope to see you there!

Human tendency to vice and sin was a recurrent topic in discussions concerning practical philosophy in the middle-ages. One of the main reasons for its centrality was Augustine’s view of the fallen human nature, which affected both political and moral theories significantly. Medieval philosophers inherited the view that humans are unable to direct themselves to good without grace, and it provided them a broad theoretical framework to analyse various detailed philosophical topics. Augustine was not, however, the only source where ideas concerning human wickedness were found. Despite Aristotle’s more optimistic outlook concerning the human nature, he presents two ideas that medieval commentators found highly relevant for understanding human potential for evil: (1) the idea of bestial vice in book seven of Nicomachean Ethics, and (2) the remark in Politics 1.2 that one who exists without law and justice is worse than animals. These two cases relate the vicious person to animals, but in different ways: the first is similar to animals, while the second is normatively speaking below them. The fundamental difference between these two cases of radically evil behaviour points to two conceptions of moral viciousness. On the one hand, humans act against common good and natural law because they are drawn by emotions, and in the most radical case they lack reason altogether and are guided by emotions only, just like beasts. On the other hand, vice can be seen as the opposite of virtue: a disposition to act in ways that are opposed to the common good and natural law. In essence, the difference boils down to the role of intentionally choosing evil vs. lacking a proper rational control over one’s actions. This paper analyses fourteenth century discussions of these different ways of being vicious, focusing on John Buridan (but possibly considering also other fourteenth century authors, such as Nicholas of Vaudémont).