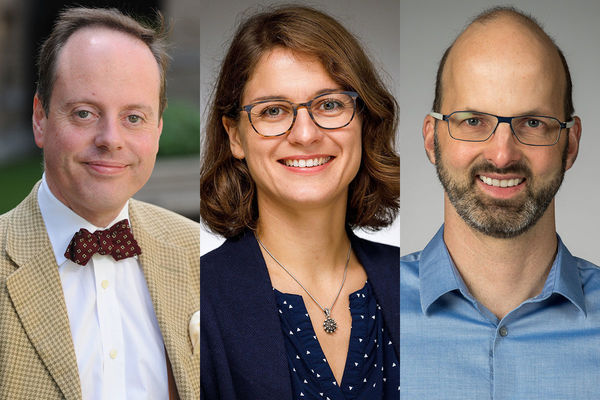 Three faculty members from Notre Dame’s Department of Philosophy — Richard Cross, Katharina Kraus, and Samuel Newlands — have been offered fellowships from the National Endowment for the Humanities.

Scholars in Notre Dame’s College of Arts and Letters have received a total of 68 NEH fellowships since 1999 — more than any other university in the country.

“We are thrilled and proud that these three philosophers are continuing Notre Dame’s unprecedented success in earning NEH fellowships,” said Sarah A. Mustillo, the I.A. O’Shaughnessy Dean of the College of Arts and Letters. “These awards recognize the outstanding research that is happening here across a range of disciplines, the creativity and originality of our scholars, as well as the excellent support provided by the Institute for Scholarship in the Liberal Arts throughout the application process.”

The Metaphysics of Christology

Richard Cross, the Rev. John A. O'Brien Professor of Philosophy, said the NEH fellowship would allow him to continue work on his book project, The Metaphysics of Christology: William of Ockham to Gabriel Biel.

The work covers the years from 1310 to 1500 in Western thought and explores philosophical issues that arise concerning the relationship between Jesus Christ’s divinity and humanity as outlined in Christian teachings. It is part of a sequence of five books Cross is in the process of writing on this issue as it arises in medieval discussions.

Cross wrote the first volume 20 years ago, covering the years between 1250 and 1310. Over the past three years, he wrote two more, on the 16th and 17th centuries. Following this project, he hopes to complete the series with a volume on the period from 1050 to 1250.

“Why choose these years? Because this was the period of the richest philosophical speculation on the metaphysical structures and categories required to make sense of the doctrine and to give some kind of philosophical explanation of how such a union of divine and human might occur,” he said.

Katharina Kraus, an assistant professor and concurrent faculty member in the John J. Reilly Center for Science, Technology, and Values, will continue work on her project, Individuality and Interconnectedness: Essays on the Enlightenment Idea of Harmony.

“I am grateful to the NEH for offering me a wonderful opportunity to pursue a topic that is very close to my heart,” she said. “Even though the rational ideal of harmony has often been met with disregard or denial, it seems to me that many Western societies today — especially in the face of current global crises — demonstrate the urgent need for such an ideal.”

Kraus aims to reconceive the relationship between individuality and interconnectedness in modern societies by recovering foundational insights on harmony from Enlightenment thought. Enlightenment philosophers are well known for emphasizing the importance of human personhood and individual freedom, yet they are equally concerned with the role each human plays within the orders of nature and society. In their attempts to understand how free human agents form a viable community, many Enlightenment philosophers draw on some notion of harmony, or the idea that there is some overall coherence or systematic order within a whole composed of diverse elements.

“The Enlightenment ideal of harmony, however, has received scathing critiques from contemporary empiricists, as well as from post-Kantian thinkers, especially those who aim to unveil the irrational, disorderly, and ambivalent aspects of human life,” Kraus said. “In this project, I intend to explore the Enlightenment idea in its historical context and to defend — in systematic respects — a version of this idea. Specifically, I argue that this idea should be understood as an indispensable normative guideline for human self-formation in modern societies.”

Kraus has also won a Humboldt fellowship, which will begin in January 2021, to continue her research on the project, “The Life of the Mind: An Alternative Theory of the Mind in Modern Philosophy,”at the Université Paris VIII.

Samuel Newlands, a professor of philosophy, was offered the NEH fellowship — his second such award — to continue work on his next book, No Cheating: A Spinozistic Reading of Early Modern Metaphysics.

“Spinoza was easily the most vilified and castigated European philosopher for centuries — people lost their jobs and even had their lives threatened if they seemed even vaguely sympathetic to his views,” Newlands said. “But if I’m right, Spinoza’s contemporaries had other reasons to be worried about his views.”

Newlands argues that the metaphysical views of Spinoza’s fellow early moderns tended toward Spinozistic conclusions in ways that their advocates fiercely wanted to avoid. Spinoza’s views exerted a tremendous pull on nearby alternatives, he said, creating a kind of philosophical vortex that proved difficult to escape. From Spinoza’s vantage point, prominent early moderns respond to this threat by cheating. They fail to follow through on their own principles solely for the sake of avoiding Spinozistic conclusions, leading them to positions that are less stable and defensible than the alternative.

“Insofar as contemporary philosophers find some of these early modern metaphysical frameworks and commitments attractive — as I myself do — this project also poses a live challenge not unlike what the early moderns themselves faced: whence our own confidence in the falsity of Spinozism?” he said.

Newlands credits the collaborative and vibrant intellectual community he has found in the Department of Philosophy and in Arts & Letters with his success in winning this fellowship.

“Notre Dame is clearly committed to the flourishing of the humanities, and Dean Mustillo and the College have been very supportive of our department’s ambitious research goals,” Newlands said. “I am incredibly happy to be part of an institution in which philosophical inquiry is so highly valued and generously supported. I am especially grateful to the recently retired Ken Garcia, whose steadfast dedication, insight, and experience in ISLA helped so many of us with grants and fellowships over the years.”

Originally published by Carrie Gates at al.nd.edu on December 18, 2020.